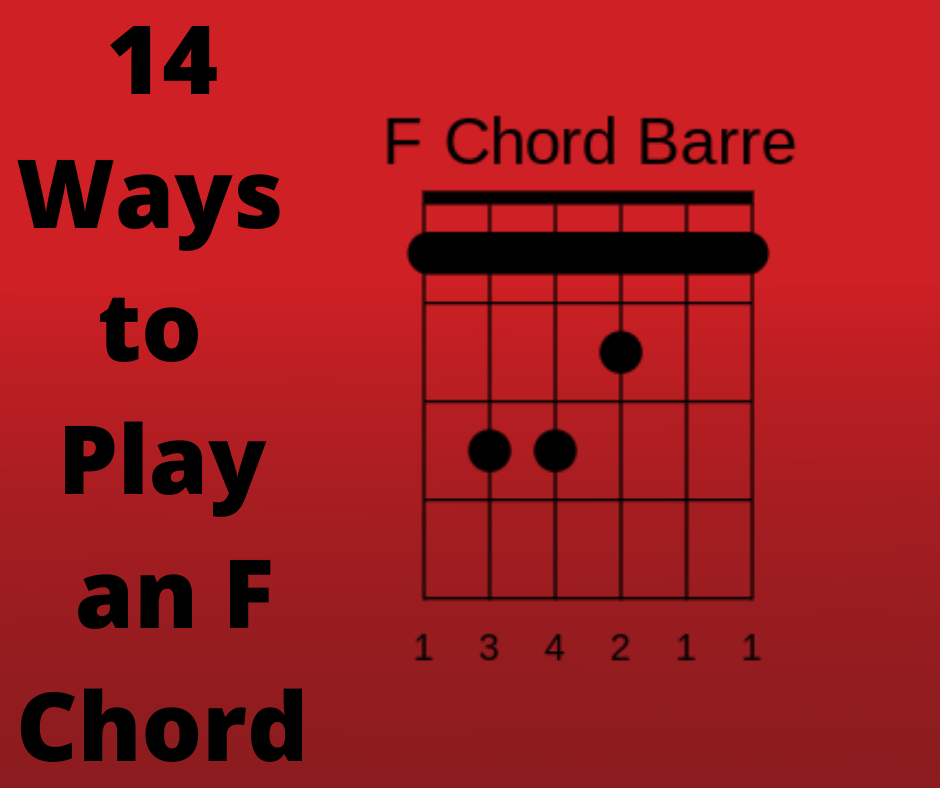 In this lesson we will look out how to play the F chord on guitar in a number of different ways. To clarify, when we say the F chord, we are actually referring to the F major chord. Also, F chord variations simply mean we play the chord at different locations on the guitar neck.

The notes of the F major are:

Many new guitarist consider the F chord to be one of the most difficult to play. It is this version of the chord that built that reputation. There is good reason, it requires the player to bar their first finger, all six strings are incorporated and at this position the frets are apart.

This is the hardest version, keep reading for easy F chord versions.

You don’t have to play all of the strings! Especially is there is another guitarist or bass player with you. This is essentially the top four notes of the previous version.

Huh? An F chord shaped like a C? Not exactly.

This version of the F chord is based in the extremely common open C chord. However, to make it an F chord, it is no longer open.

F Chord at the Eighth Fret

If you feel comfortable with barre chords, this one will require only two fingers. If you are still struggling, you substitute your second, third, and fourth fingers for the barre.

But don’t give up on barre chords!

F Major on the Thirteenth Fret

This chord is pretty far up the neck and also requires barring your first finger. It sounds very nice when playing with another guitarist who is playing lower on the neck.

Up until now, we’ve been looking at chords with some of the notes doubled. This next group of chords only have three notes and may only have two.

A partial does not have all three notes. An inversion will not have an F as the lowest note.

Here we go using another chord to describe an F chord!

The open D chord is also a challenging chord for beginners. Once you learn it though, why not use the shape again?

On a side note, did you know the open D chord on a guitar is the G chord on the ukulele?

F Chord on the Eighth Fret

F Chord on the Thirteenth Fret

Guitarist may not prefer the key of F because there is no open strings when using a minor pentatonic scale to solo. However, don’t let that scare you away from the chord or the key of F.

Popular Songs in the Key of F

Are Guitar Lessons Worth It

How To Play an E Chord on the Guitar