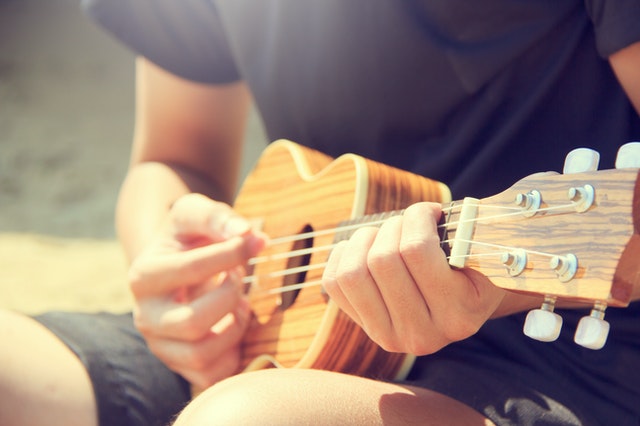 If you looking to learn how to play the F chord on a ukulele you’ve come to the right place. For most ukulele students, the F chord is probably the second or third chord learned after the C chord.

The notes of the F chord are:

F is the root note. A is the third and C is the fifth.

The chord chart below depicts the most common way to play the F chord on ukulele. All four strings of the ukulele are played giving it a full sound.

This version is a simplified version of the F. You are simply not playing the A note on the fourth string. This is acceptable because you are still playing the A on the first string.

An even simpler version, this would be considered a partial chord or a power chord. With this chord we drop the A note. Power chords are popular on guitar when playing rock songs but they are usually playing on the lower strings.

F Chord Further Up the Neck

This version of the F chord is probably the most challenging due to the fact it is a bar chord. If you find the bar too challenging, the second chart shows you how to play with individual fingers.

Don’t be ashamed of not playing the bar version. Many serious uke players will opt for the non-bar versions.

Here is a simplified version leaving out the fourth string.

Even further up the neck we find another way to play the F chord. This requires a bar on the first and second string which most will find much easier than our bar on the fifth fret.

Here is a simplified version where we leave out the fourth string.

Now, when it comes to the F chord on ukulele, you should be able to use any part of the neck.

Learn the C Chord on Ukulele

Notes on a Ukulele Neck